Disney has two new home entertainment releases out this month, both perfect for holiday gift-giving. Which one would your kids love to find under the tree? We pick both! 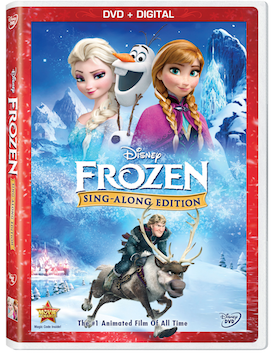 “Experience Frozen, the hit musical comedy from Walt Disney Animation Studios, like never before in an all-new, full-length Sing-Along Edition! Follow the lyrics and join Anna as she sets off on an epic journey – teaming up with rugged mountain man Kristoff and a snowman named Olaf – to find her sister Elsa, whose icy powers have trapped the kingdom of Arendelle in eternal winter. It’s pure enchantment – and full of fun for the whole family!”

This movie went in the player as soon as it came in the door. Even though we’ve seen Frozen at least a dozen times, we’re always up for one more! To be honest though, it’s not like we didn’t know all the words already! Note this is not just a collection of songs like some other Sing-Along DVDs. This is the full movie with the lyrics on the screen during the songs and a bouncing snowflake to help you follow along karaoke-style. You do have the option in the Bonus Features to only play the songs if you prefer.

I noticed the lack of a sing-along feature in the original Frozen Blu-ray release, so I’m very happy to have this, though I’m not sure why it’s only available on DVD + Digital HD. Regardless, it’s Frozen, and your kids will love it!

Bonus features include: “Breaking the Ice”, the original theatrical short “Get a Horse!”, and the Sing-Along Selection. 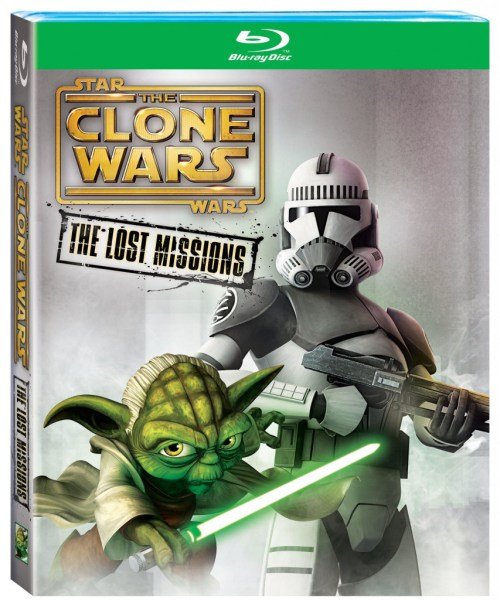 “Against a backdrop of ever-shifting loyalties, uneasy alliances and ancient hostilities, the conflict between the Republic and the Separatists ramps up, setting the stage for Darth Sidious’ ultimate act of treachery against the Jedi. In these uncertain times, some of the deepest mysteries of the light and dark sides of the Force are revealed as an intrepid clone trooper uncovers a shocking conspiracy. Anakin Skywalker’s closest relationship is tested to its limits, and Master Yoda makes a discovery that could forever change the balance of power in the galaxy. Complete your collection and experience all the wonder, intrigue, action and suspense of The Lost Missions in 13 must-own episodes – plus nearly two hours of bonus features – as this thrilling chapter of the Star Wars saga comes home on Blu-ray High Definition for the first time!”

These thirteen episodes make up the sixth and final season of the Star Wars: The Clone Wars TV series created after the show was pulled from the Cartoon Network in 2013. This past March they aired on Netflix, and now they’re available on DVD and Blu-ray!

Hubs is a big fan of the series, and he was excited that I finally had something for him to review! According to hubs, “I know that the writers had planned more of a story than they could tell in the five seasons. The Lost Missions picked up some of the story lines that weren’t resolved and sets the stage for Revenge of the Sith. It’s great to complete my collection!” Star Wars: The Clone Wars: The Lost Missions Blu-ray is available at Amazon.ca or Amazon.com.

One reader will win a copy of the Frozen Sing-Along Edition on DVD! Enter to win in the Rafflecopter widget below. This giveaway is open to residents of Canada and the US, 18+. All entries will be verified. Prize delivery is not guaranteed by Christmas, so please plan accordingly.

Check out my other giveaways over in the right sidebar!

a Rafflecopter giveaway
Disclosure: I received sample items for review. All opinions expressed are completely honest and my own, based on my personal experience. Your experience may differ. This post contains affiliate links. This West Coast Mommy is a participant in the Amazon Services LLC Associates Program, an affiliate advertising program designed to provide a means for sites to earn advertising fees by advertising and linking to Amazon.com.