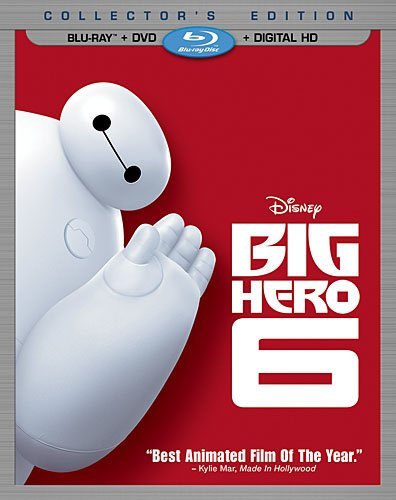 With all the heart and humour audiences expect from Walt Disney Animation Studios, Big Hero 6 is an action-packed comedy adventure that introduces Baymax, a lovable, personal companion robot, who forms a special bond with robotics prodigy Hiro Hamada. When a devastating turn of events catapults them into the midst of a dangerous plot unfolding in the streets of San Fransokyo, Hiro turns to Baymax and his diverse group of friends — adrenaline junkie Go Go Tomago, neatnik Wasabi, chemistry whiz Honey Lemon and fanboy Fred – who transform into a band of unlikely heroes. Bring home Disney’s Big Hero 6 , featuring comic-book-style action and hilarious, unforgettable characters — it’s fun for the whole family!

I started watching Big Hero 6 with the girls but soon realized they were just too young (2 and 5) for this one. The main character’s brother dies early on in the movie, and Tee was very concerned about that. There’s also a warehouse scene that both girls found scary so I turned it off until later. I watched it instead with hubs once the girls were in bed.

The story takes place is a cool, futuristic fusion setting of east and west in San Fransokyo. Brothers Hiro and Tadashi are both talented robot builders, but Hiro prefers to use his skills to gamble in backstreet robot battles. When Hiro invents new microbots that can be controlled by the power of thought, he’s invited to attend the same university as his big brother. Unfortunately, that same day a massive fire burns down the school’s robotics lab and kills Tadashi.

In his grief, Hiro’s only comfort is Tadashi’s last invention, Baymax, an inflatable health care robot. But then Hiro discovers that someone has stolen his microbot invention, and he and four of Tadashi’s friends and colleagues (thus making up the Big Hero 6), team up to stop the mysterious masked man who is using the microbots to get revenge on a tech company rival. Along the way, Hiro matures out of his own quest for vengeance and discovers the desire to do the right thing.

I want my girls to see this when they’re ready. I love the themes behind Big Hero 6 – coping with loss, personal responsibility, teamwork, friendship, and self-sacrifice. I also really appreciate the focus on STEM (science, technology, education, and mathematics) fields. There’s lots of action, and Baymax’ tendency to take everything literally, soft-spoken delivery, and marshmallow inflatable body are the main source of comedy and incredibly endearing.

Big Hero 6 is available on DVD and Blu-ray+DVD+Digital HD at Amazon.