Marvel Studios’ Black Panther, the highly celebrated story of a young African prince who takes on the mantle of King and Super Hero, has thrilled and inspired moviegoers around the globe. It seems like only last month we were all watching and raving about Black Panther in the theatre, but now you can bring it home on 4K Ultra HD, Blu-ray, DVD, and On-Demand on May 15. 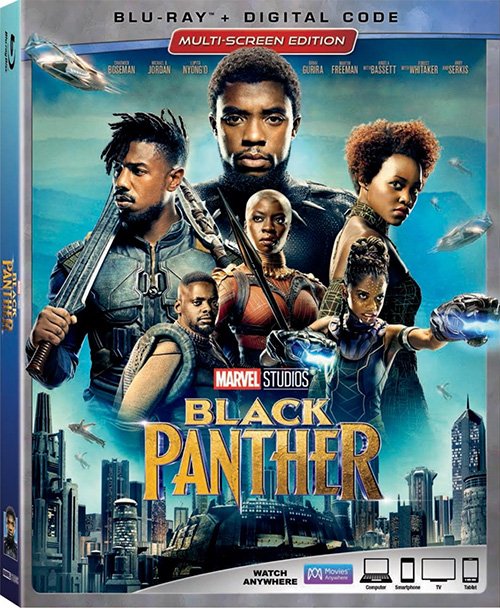 The African nation of Wakanda hides a secret behind its facade of a seemingly third world country. Wakanda contains the source of the indestructible, extraterrestrial metal Vibranium which its scientists have used to develop highly-advanced technology. The movie opens with King T’Chaka confronting his brother N’Jobu who has been selling stolen Vibranium to a black-market arms dealer, Ulysses Klaue, with the goal of sharing Wakandan technology with people of African descent so they can conquer their oppressors. During the confrontation, N’Jobu is killed, leaving his teenage son to plot vengeance.

Fast forward 25 years, and following T’Chaka’s death, his son T’Challa returns to Wakanda to claim his father’s throne. He defeats the leader of the mountain Jabari Tribe to take his place as rightful king and the Black Panther. While pursuing Ulysses Klaue who has stolen a Vibranium artifact from the Museum of Great Britain, Black Panther learns about N’Jobu’s son, Erik, now a former black ops soldier called Killmonger. Black Panther is faced with a battle for his life and throne when Killmonger challenges him to ritual combat. After throwing Black Panther over a waterfall, Killmonger takes over the Wakandan throne and continues his father’s plan to ship weapons to Wakandan operatives around the globe.

Black Panther’s mother Ramonda, sister Shuri, and former lover Nakia, along with a sympathetic CIA agent named Everett Ross, flee the new administration and seek the aid of the Jabari tribe. There, they discover gravely injured Black Panther is being tended by his former rival. Once healed by Nakia, Black Panther returns to conclude his fight with Killmonger, and the still loyal all-female Special Forces battle the Wakandan army. Defeated by Black Panther, Killmonger chooses death over life in captivity. The movie ends with Wakanda reversing its isolationist policy and opening an embassy in California.

To be honest, I’m not usually the biggest fan of superhero movies, but I really liked this one. Sure, Black Panther is a superhero, but he only prevails with the talents and loyalty of his family and his people. There’s lots of great action, but the underlying themes of family, loyalty, and community responsibility elevate the story. The “supporting” characters are strong, unique characters in their own right, and I love the fierce Wakandan warrior women. As Lupita Nyong’O (Nakia) put it:

I love the way Black Panther represents women. Each and every one of us [in the movie] is an individual. We all have our own sense of power and we hold our own space without being pitted against each other. I think that’s a very, very powerful message to send to children – both male and female.

In Black Panther, we see women going about their business and supporting each other. They argue with each other and have different points of view, but they are not pitted against each other and I think that’s extremely important. In doing this, audiences can get a sense of the fabric of Wakanda as a nation, where we see women alongside men and we see how much more effective a society can be if they allow women to explore their full potential.

Hubby and I watched Black Panther on our own first, and I’m glad we did. There were lots of intense battles and scenes with brutal hand-to-hand combat, so we decided the movie would be a bit much for our younger daughters. I would suggest 11 years or older. It’s long past time for audiences to see that heroes come in all colours and genders, and I would love for my kids to watch this when they’re just a little older.

Never-before-seen extras feature commentary from director Ryan Coogler; deleted scenes; outtakes; and several making-of featurettes, which detail the Black Panther’s evolution, the remarkable women of Wakanda, the history of T’Challa’s proud nation, and the cosmic origin and technological applications of vibranium. Also included are a roundtable discussion with “Black Panther” filmmakers and writers; a featurette tracing the countless connections between heroes, characters and storylines within the Marvel Cinematic Universe; and an exclusive sneak peek at “Ant-Man and the Wasp.”