Editor’s note: This is part of an ongoing series of birth stories submitted by readers and fellow bloggers, featuring a diverse range of women and their birth experiences. All birth stories and all birth experiences matter! I’m pleased to share Alicia from Mixed Bag Mama‘s story of her successful medication-free vaginal birth after cesarean (VBAC). If you would like to share your own birth story, please visit this post to learn how. ~Olivia 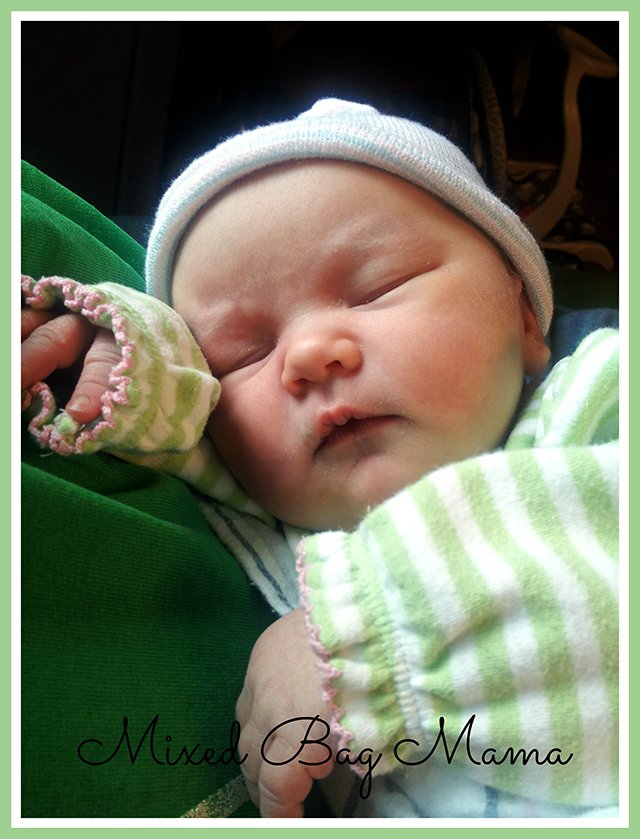 My due date with my second daughter was January 12th, two days before my own birthday. That day came and went without any excitement. The next day, Wednesday, I got my hopes up when I started getting more period-like cramps in the late afternoon. However, I woke up the next morning, my birthday, to nothing. I was disappointed and pretty much threw a pity party for myself the entire day because I was so tired of being pregnant.

I woke up Friday morning, the 15th, in one of my “must clean all the things” moods. I wouldn’t even consider it a “nesting” thing. It’s just something that hits me now and then. Anyways, it was a miracle I felt like doing anything since I had slept terribly the past two nights. Plus, the cramping was back and considerably more bothersome. But I carried on and my three year old helped me do some cleaning in the bathrooms, put dishes away, and some other random things around the house.

I decided to take a bath around 2:00 to try and relax, especially since Myka was engrossed in a movie. She ended up changing her mind and got in with me anyways, which was fine because I couldn’t get comfortable at all with the cramps. I felt like I was starting to have actual contractions, so I downloaded a contraction timing app on my phone. They were only coming about every 30 minutes, so I wasn’t too concerned.

After we both got done in the bath/shower, I made Myka lie down around 3:30 to take a nap. I put a movie in, sat down, and literally 10 minutes later started having stronger, regular contractions. Much to my surprise, I had 3 within a little less than 30 minutes, but I continued timing them for a whole hour. Again much to my surprise, they were already about 6-8 minutes apart. Since the doctor said to call if they were between 5 and 10 minutes apart, I called my husband, who had just gotten off work, and told him to skip stopping at the grocery store on the way home just to be safe.

I tried to finish gathering up all of the last minute things we would need for the hospital while I waited for my husband to get home. I was induced with my first daughter, so I was freaking out a little bit about everything happening so fast and being home by myself, especially since we live in the boonies a little bit. Luckily, he got home a little faster than usual and we left for the hospital around 6:20pm.

We somehow made it to the hospital in record time (it’s over an hour away) even though it was rainy and crummy and people were driving like idiots. My mom got there a few minutes before us, so we sent Myka on her merry way and got inside around 7:20pm. My contractions had gotten closer to 5 minutes apart on the way there and I was already dilated to 4 or 5 cm by the time they checked me in triage.

Probably about an hour later when they checked me in my room I was at 6 cm. About another hour later I was at 8 cm. At some point during this I agreed to have my water broken because the doctor “didn’t want my labor to stall”. As fast as things were progressing I knew that wasn’t going to happen, but I had heard some people say the pain of contractions isn’t as bad afterwards. False…for me, at least.

Anyhow, the last time they checked me they said I was at 9 or 10cm…and my body promptly started pushing as soon as she was done checking me! I definitely wasn’t expecting that because I had an epidural while pushing with my first, even though I didn’t feel the urge to push. I really had no idea of what to expect without any pain medication of any kind!

All in all, I think I pushed for roughly half an hour. It didn’t even feel that long because everything happened so fast. Like I said, my body was literally doing the whole pushing thing on its own. I had nothing to do with it. It was kind of scary, in a way, because I felt like I had no control.

I finally got to a point between contractions to where I tried sitting up to see if that would help with the pain, even though I was already pushing. When I had my next contraction I promptly shook my head and laid back down because there was a lot of pressure down there. After a few more pushes I could feel her head working its way down. For whatever reason, they couldn’t find my on-call doctor even though I had already seen him, so they had to page another one from a different practice who was also there to come in. Her head was already partially, if not all the way, out by the time he got in the room. They told me to stop pushing for a second at one point. Yah right.

Anyways, after 2 or 3 more pushes she was out! Little Miss Ripley was born at 10:35pm on a Friday night after only being in labor for 7 hours. She weighed in at a whopping 8lbs 15oz. I’m still in a little awe of that. I can’t believe I squeezed a baby that big out of my body without drugs. I kept telling my husband, “I did it!” I’ve read this in a lot of birth stories, but it really was an empowering experience! If you’re thinking about a VBAC, definitely find a supportive provider! 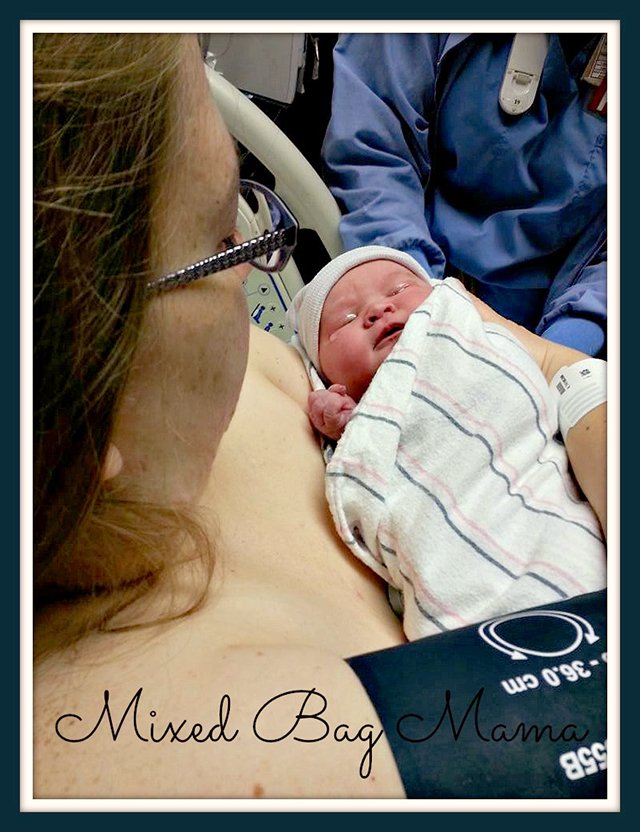 Alicia lives with her husband and two daughters in rural southern Indiana. She enjoys doing crafty things, reading, and doing anything outdoors. You can find the full birth stories of both of her daughters on her blog, Mixed Bag Mama, as well as a range of topics, including homesteading, parenting, and preschool homeschool fun. Connect with Alicia on Facebook, Twitter, Instagram, or Pinterest.